My research interests include the physics of…

The aim of my postdoc work is to measure stable Alfvén waves in tokamak plasmas before they are driven unstable by energetic plasma particles. To understand the motivation for this, let’s take a step back. In a magnetized plasma, magnetic field lines can support waves much like strings on a guitar. The pitch (frequency) of a guitar string decreases as its mass and length increase; the Alfvén frequency also decreases with the local plasma mass density. Because a guitar string is tied down at both ends, it can only support certain wavelengths (modes); the periodicity of a tokamak also only allows certain Alfvén eigenmodes (AEs). When you continuously strum a guitar, you provide energy to produce sound waves; analogously, energetic plasma particles (such as DT fusion products) can drive AEs.

But a guitar can’t play itself. In order to know which note a guitar string sounds, you must pluck it. In a similar way, we sweep our antenna frequency up and down (see the triangular waveform below) and try to resonantly excite AEs before they are destabilized (see the squiggles below). By “plucking” AEs in a variety of plasmas, we investigate their different driving and damping mechanisms. This is important because future fusion devices will produce many energetic alpha particles, which could drive AEs and potentially lead to degraded fusion performance.

I have recently assembled a database of over 5000 stable AE resonances and completed a dedicated study of plasma coupling with our antenna. Upcoming work will analyze stable AEs at very high external heating powers (25 MW) and explore opportunities for active MHD spectroscopy. We are excited to see how our diagnostic performs in the upcoming H, T, and DT experimental campaigns of the JET tokamak.

My PhD thesis work focused on the physics of “runaway” electrons (REs) in tokamak plasmas. Interestingly, in a plasma, the probability of one particle colliding with another decreases as the particle’s speed increases. This means that, given a strong enough electric field in a plasma, a fast electron can overcome friction and “run away” to relativistic energies! While REs are neat plasma phenomena, they can also impact the wall of the plasma chamber and cause serious damage. The ultimate goal of this field of research is to understand enough about RE evolution to avoid (or mitigate) them in future fusion devices.

We generated REs in the Alcator C-Mod tokamak, which has a strong enough magnetic field for REs to emit visible synchrotron radiation. In close collaboration with the Plasma Theory group at the Chalmers University of Technology, I have studied how synchrotron spectra can indicate RE energies, how synchrotron images – like those shown below – can give insight into RE spatial and temporal dynamics, and how polarized synchrotron emission can probe the RE pitch angle distribution and current profile. I am currently leading the study of polarized synchrotron radiation on the JET tokamak and am providing input on expected RE generation in SPARC.

Fusion-grade tokamak plasmas can have temperatures over 100 million Kelvin and carry currents over 1 million Amps! Therefore, they carry a lot of thermal and magnetic energy. Confining a donut-shaped plasma in a “magnetic bottle” can sometimes lead the plasma wriggling out of control and expelling its energy over milliseconds; this is called a plasma disruption. For future power-generating tokamaks, disruptions need to be predicted in advance and avoided – or their effects mitigated if avoidance is impossible.

To better understand the physics of disruptions, I have studied radiation asymmetries from mitigation of “healthy” and “sick” C-Mod plasmas, measured profiles of “halo” current as disrupting plasmas touch the vacuum vessel wall, and built databases for new machine learning applications to disruption prediction algorithms. Most recently, I used the statistical methods of survival analysis to make time-to-disruption predictions from output signals of a Random Forest disruption predictor.

(Runaway electrons – mentioned above – can also be generated during disruptions. See the impact of runaways with the vacuum vessel wall in the figure below.)

A future fusion power plant will have to confine a plasma with a high enough pressure for a long enough time in order to produce net energy, i.e. more power output (from fusion reactions) than input (to run the device). In the past, the main focus of the fusion community was to make the device really big – more plasma means more power. However, big machines are costly. Recently, advancements in high temperature superconducting (HTS) magnets allow another path: compact (cheaper) devices with high magnetic field strengths, strong enough to balance high plasma pressure. This was the inspiration for the conceptual ARC pilot plant, as well as MIT’s newest venture, the net-energy SPARC tokamak, in collaboration with Commonwealth Fusion Systems. 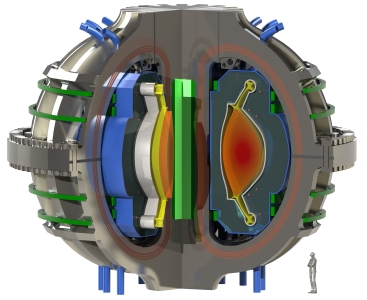 During my time at MIT, I got to work on – and inside! – the Alcator C-Mod tokamak. With the highest magnetic field strength of a tokamak, C-Mod broke the world record for stored plasma pressure on its last day of operation, 30 September 2016. Since then, I have helped update the ARC design – see the rendering – to include a novel divertor design and robust heat exhaust management system. In addition, I have explored the feasibility of neutron diagnostics for a high-field, compact, SPARC-like device.

The mathematical existence of black holes is one of the most amazing consequences of Einstein’s general theory of relativity. Astronomical evidence suggests that there are many super massive objects in our universe, sitting at the centers of galaxies and colliding to produce gravitational waves; these are very likely black holes. However, we will not likely have the chance to visit one in our lifetimes. A field of research called transformation optics aims to study black holes in the lab by tailoring optical media to have black-hole-like properties.

My good friend Dr. Andrew Turner and I submitted two short pieces to Harvard’s Black Hole Initiative essay competition. Andrew’s brainchild, “Black Holes, Entropy, and the Arrow of Time,” won fourth place! Check out this article in the magazine Nautilus and Elon Musk’s tweet about it. And my hope of “Building a better black hole demonstration” led to our newfound interest in and exploration of optical black holes. 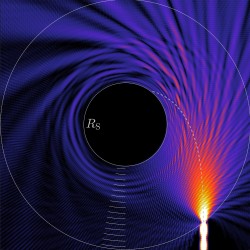 Recently, Andrew and I calculated the dielectric permittivity and permeability tensors which exactly reproduce the equatorial Kerr–Newman metric of a spinning, charged black hole. In addition, we determined the profile of scalar refractive index which can reproduce the trajectory of light all the way to the event horizon – see the simulation at right – of most KN black holes. Such an optical black hole could even be constructed with materials like glass, plastic, and water!